Gold Coast Packing Inc., a close to four-decades-old California grower-shipper that has specialized in the foodservice sector, is expanding its product line to include more retail offerings. 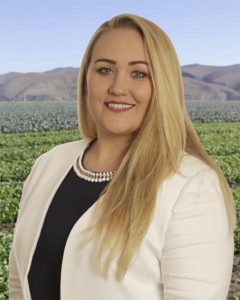 Marketing Manager Katie Boncich was quick to note that the firm is not altering its focus, just diversifying and adding to its product line. She explained that the firm has a great innovation team and its new efforts are designed to broaden the marketing opportunities for its core products. She characterized the new retail packs in developments as “staying on trend” with the items it already produces.

The best example is the riced cauliflower grown and packed by the firm. Called Gold Coast Caulifornia Snow, the product was developed more than a year ago and has been marketed to foodservice operators around the country. Boncich said the use of riced cauliflower allows chefs to tout some of the new trends, including gluten-free and veggie-centric, on their menus.

Gold Coast is now taking that same product, putting it in a retail pack and inviting consumers to imitate what they are ordering in some of the country’s finest restaurants. 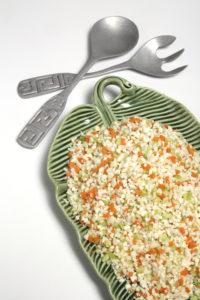 The company is also working on another retail pack that offers a garden blend of riced cauliflower, broccoli and carrots. Boncich said those three items, along with spinach, kale, cilantro and brussels sprouts, make up the core of the company’s product line, though it grows other items as well.

She characterizes Gold Coast as a “smaller grower-shipper” that relies on customer service for its advantage in the marketplace. “We are known for doing specialty cuts and packs.”

For example, she said the company provides the Taco Bell restaurants with all of its cilantro throughout the country, delivered to the exact specifications that the giant fast food chain demands. Boncich said they will do the same for any other customer, creating packs and cuts that fill the buyer’s needs.

Several years ago, Gold Coast Packing and another Santa Maria grower-shipper, Babe Farms, co-built and co-own Fresh Venture Foods, a local vegetable processing plant. It is in this facility that Gold Coast can create the special packs and cuts for its customers. She said the co-ownership also affords buyers one-stop pick-up when in the Santa Maria area.

Along with the company’s expanding product line is coming increased visibility to its customers and potential customers. Gold Coast has redesigned its website, hired a new social media-focused marketing coordinator in Crystal Chavez, and has launched a new monthly blog. Titled “The Produce Navigator,” the blog is designed to keep its customers up to date with regard to the firm’s expanding product line and new packs. In addition, Boncich said there will be a reach out to consumers as well as chefs with new recipes and product information. The goal of course is to get both home cooks and professional chefs to use more veggies. The first blog entry was published in March and the April posting promises a recipe featuring its trademarked Caulifornia Snow.

Gold Coast is a vertically integrated company that grows about 35 percent of its production on its own ground in Santa Maria. It also contracts with a handful of other growers in both Santa Maria and in the California and Arizona deserts for winter production. Boncich said that currently about 70 percent of its production goes to the foodservice sector. Much of its retail activity has been in private labels but the new expansion will tout the Gold Coast label. Boncich explained that rising costs, including labor, requires a successful firm to continue to grow and expand. She likened the firm’s several sectors to a pie, with retail being one portion of the pie. “We need to add to the pie, grow that portion and diversify that product line.”